This past week, September 19-25, was National Forest Week. There is no question that forests are important as part of the Canadian landscape. But to travel through most of Chatham-Kent (CK), one would not recognize forests as being important at all. CK has about the lowest amount of forest cover of any municipality in Ontario, at about 3-4%, and that is being generous. Some people consider any tree cover, such as recent plantations and hedgerows as legitimate forest, but that is really stretching it. Even much of the real forest cover that still exists in CK is not in great condition, as water tables have been altered, they have been influenced by agricultural chemicals, there has been the arrival of invasive species, almost every woodland has undergone some logging, some of it heavy, etc. 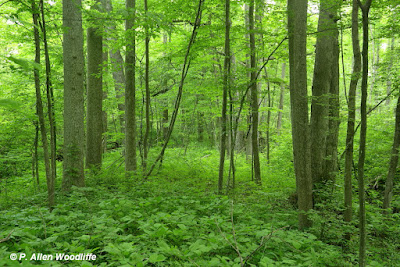 A good quality forest has a tremendous positive impact on the local, and even more distant, environment. It stores water, preventing flooding and keeps harmful chemicals out of things like the Thames River and water bodies downstream, all of which are sources of drinking water for parts of the human population, not to mention the better quality water that the natural wildlife requires.

Residents of CK and adjacent municipalities might have vivid memories of the most recent serious flooding which took place in February, 2018. These photos were taken from the general down town part of Chatham. 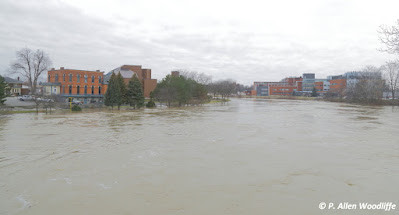 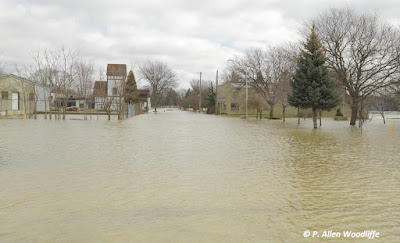 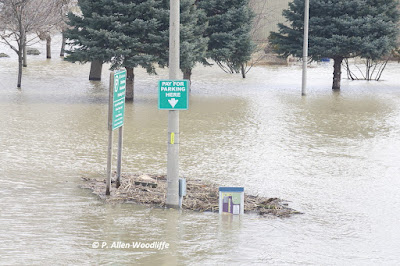 Forests reduce soil erosion, with the top layer being most important for crop production and thus reducing the extra costs of adding artificial fertilizers, part of which will wash away into the downstream areas thus negatively affecting water quality. Soil erosion is a serious problem. Here is an example of severe erosion which happens all too often: a tilled field, with a bit of snow on top and then covered with wind-blown soil from a nearby field.

The lack of forests obviously has a huge impact on our native wildlife. Southwestern Ontario has arguably the greatest biodiversity of native flora and fauna in Canada, even in its present state. But many of those species are rapidly dwindling. The greatest number of species at risk occur here in the southwest, in part because there are relatively few places for them to occupy.

In recent years, there has been a lot of effort by local people in CK to try and get a Forest Conservation By-law in place, to protect the remaining woodlands and prevent scenes like this. 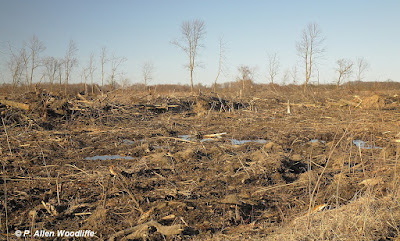 But it has been met with lots of opposition by a few landowners who don't want anyone to influence what they can do with the woodlands on their land. Some landowners are really good stewards of the natural resources they have, and credit should be given for their efforts and foresight. However the ones most vocally against such a by-law are apparently more interested in short-term profits than the long-term benefits of woodlands. Admittedly if the local council had put a by-law in place decades ago, like the majority of other southern Ontario municipalities, there would be more woodlands in CK and so the responsibility would not fall on those landowners who still have some.

I'm not against agriculture. I grew up on a farm in CK, and I get it. And I am not suggesting that landowners should bear the brunt of maintaining woodlands totally. If it is good for the community, then the community should ante up support to relieve any financial pressure on the landowners. One of the reasons that remnant forest are even more valuable nowadays is because so many landowners of yesteryear got the jump on the action, removing many hectares of forest since settlement.

There are some who have taken it upon themselves to plant trees, either as a hedgerow or even taken out some perhaps less productive farm land and put in a plantation. While these are useful, they are very small steps towards maintaining quality woodlands.

One must consider the huge differences between planting say, 5 acres of trees versus retaining a 5 acre woodland. There really is no comparison, and won't be for decades, even centuries. It is even hard to know where to start when considering the differences. But consider the following.

A good quality forest will have: 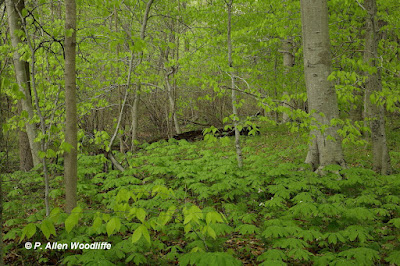 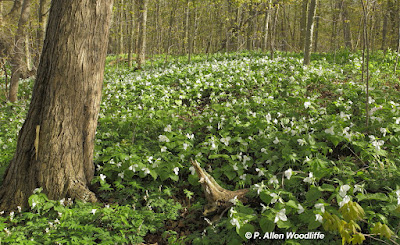 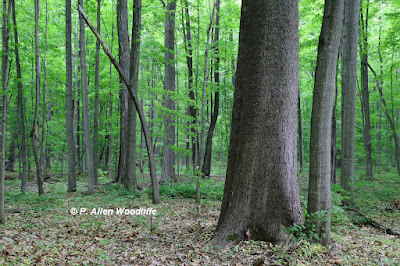 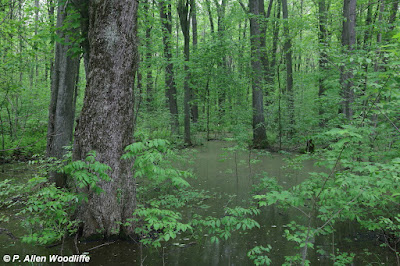 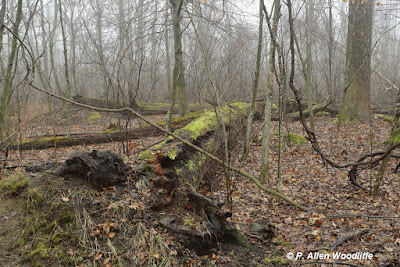 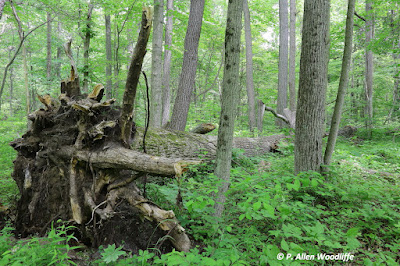 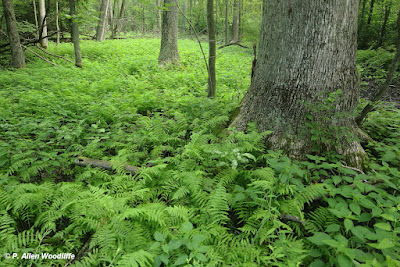 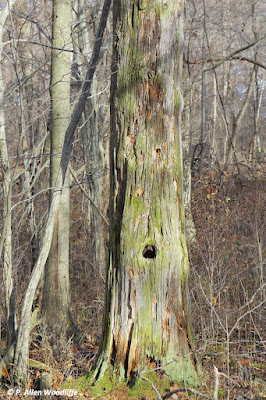 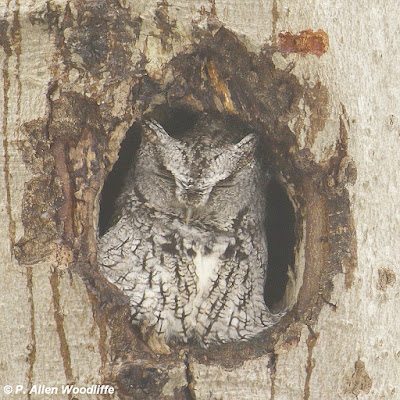 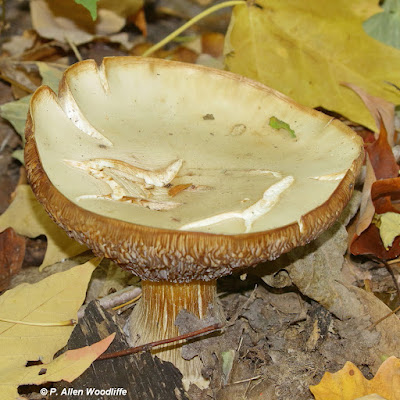 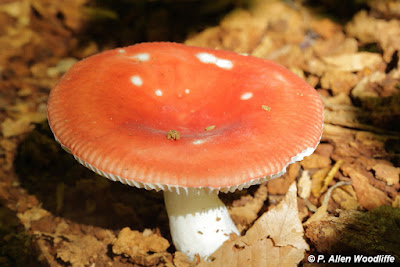 Overall, the greater diversity of flora and fauna there is in a woodlot, the more stable it is, and will be more able to withstand the difficulties it must face over the years, whether it be an invasive species infestation or extreme weather conditions.

This certainly has been borne out with examples of plantation planting in CK and elsewhere. In the last century or so, there have been many plantations established in southern Ontario. Most were planted as conifers, such as spruce or pine, especially if they were on the more sterile and well drained sandy soils. The spruces used were not naturally occurring in southwestern Ontario, but were a good start in some ways. The spruces were used as a 'cover crop' essentially until native hardwood species might arrive and become established many decades later, if there was a naturally occurring source of seed nearby. In the 1980s, local forestry staff thought that skipping that 'cover crop' stage and directly planting native hardwoods, such as ash trees, would speed up the process. It was a great idea and initially had some success. However most readers will know the longer term outcome. The non-native Emerald Ash Borer (EAB) arrived about two decades ago, and quickly killed most ash trees in southwestern Ontario. It has now reached more northerly and easterly parts of the province.

Here is a recent photo of an ash plantation that was established in about 1989. While parts of it are still alive, with ash trees that suckered after the main stems were killed by the EAB, and nearby tree species started to come in, it is anything but a good looking plantation and likely never will be, assuming it lasts for another century or more. I know of other ash plantations planted at the same time which suffered heavy damage by the borer and were completely removed and turned back into an agricultural crop on the poor quality soils. 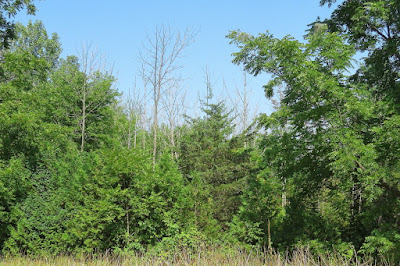 Here is an example of another plantation effort in CK also established in the 1980s, this time of Black Walnut.  Clearly they are still alive, and haven't been affected by an invasive insect such as the Emerald Ash Borer. Maybe this plantation will survive. Some people would consider this as part of the 3-4% forest cover in CK, and from an aerial view, it does sort of qualify. But as a good quality functioning forest? Not even close! 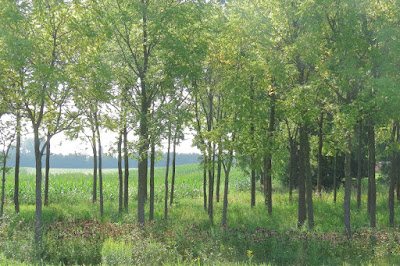 The trees are fairly uniform in size due to their similar age. The diversity is non-existent, as it is a single species planting, although it is native. What is really telling is what is growing under the tree canopy. It is primarily, if not entirely, made up of non-native species, with a lot of grasses. While some of the visible wildflowers may be pretty, they are Purple Coneflower, a tallgrass prairie species not native to Ontario. And herein lies the problem. Precipitation is taken in primarily via the roots of the trees. Grasses create a dense sod, and intercept most of the precipitation therefore it gets to the tree's roots. depriving the trees of needed moisture in which to thrive. Although the trees themselves are around 35 or more years old, most of the trunks are spindly for their age. They have not grown anywhere close to their potential given the full sun and no competition from other tree species. It will take many decades, even centuries, if ever, for this plantation and others like it, to even begin to look and function as a forest. And with the current high value placed on Black Walnut for the furniture industry, chances are it will be cut down in several decades, assuming the trees will get to merchantable size.

One of the most difficult things for a plantation type forest to overcome is the lack of critical mycorrhizae in the soil, a very important but fundamentally necessary component of productive soil as described above. Years of agricultural disturbance, from annual tilling, compaction of soil due to heavy equipment as well as the addition of chemicals, whether they be fertilizers or for weed control, have destroyed the mycorrhizae. 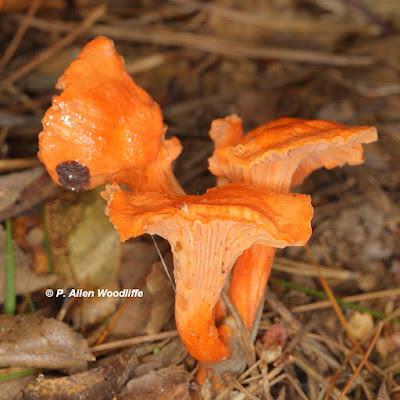 The only responsible solution is, for starters, to protect and retain the limited forest habitat still surviving in Chatham-Kent. Plantations adjacent to these forests will have a much better chance at becoming functional decades before a stand-alone plantation, as the seeds from the functioning forest will gradually enter the plantation. Will the current elected officials decide on a Forest Conservation By-law that is in the best interest of all citizens as well as the numerous species of flora and fauna that are struggling to survive in these habitats? Or will they capitulate to a small number of individual landowners in opposition to such common sense, as so many of their predecessors have done in the past? Only time will tell. 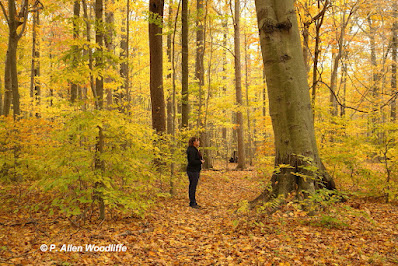 If you want to subscribe, or unsubscribe, to Nature Nuggets, email me at prairietramper@gmail.com